The cats can be found across much of Southern and East Africa, including Kenya, Tanzania and South Africa, however their numbers in each country are quite low in comparison to other big cat species. To make the most of their speed, cheetahs prefer the open plains to hunt small antelopes such as Thomson’s gazelles and impala. They often use grassy knolls, termite mounds or even vehicles to improve their view over the flat surrounding plains in search of prey. They also hunt other small prey including hares and warthog. To see a cheetah hunting in full flight really is a sight to behold. 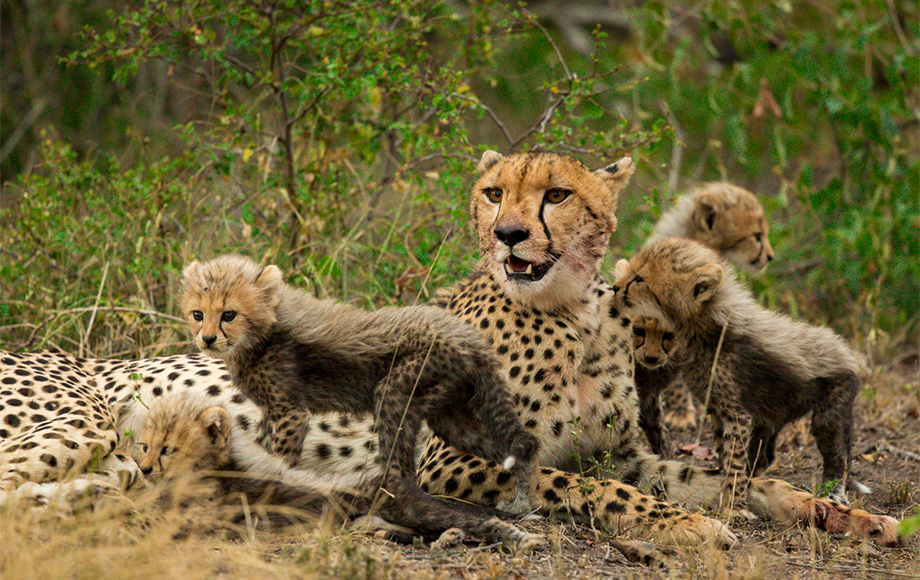 Cheetahs can only run at top speed for very short bursts of time; and use their tail to balance as they twist and turn after their prey. As a result, they try and get as close to prey as they can before sprinting. The cats use their paws to trip the animal, before swiftly trying to suffocate the neck. As cheetahs are at the bottom of the predator pecking order, they then start eating as quickly as possible, always on the lookout for scavengers. Cheetahs are often bullied off kills by other predators such as lions, hyenas, vultures (in enough numbers) or even baboons.

Fragile cats, they are built for speed with long limbs and slender bodies. Cheetahs are often confused with leopards due to their markings – cheetahs have solid black spots and black ‘tear’ marks running down their cheeks – compared to a leopard’s distinct rosette markings. The other major differences is that leopards are far heavier, stockier animals, and cheetahs, unlike other cats, don’t have retractable claws.

When viewing cheetahs on safari it is almost exclusively done by 4WD safari vehicle – considering their habitat is open savannah. If guests are lucky, a cheetah (or cheetahs) may even use the vehicle as a termite mound – a thrill few safari goers will ever forget. They may even use the vehicle as shade from the sun’s rays.  This happens more frequently In East Africa across the wide open plains of Tanzania’s Serengeti National Park or Kenya’s Masai Mara National Reserve.

Watching a cheetah hunt is also an exhilarating experience – seeing a cheetah sprinting in full flight after a gazelle or impala is a heart-stopping experience. The fastest land animal on the planet these cats can reach speeds of up to 120km/h. Sitting and watching the interaction between cubs or a mother and her cub is also fascinating and heart-warming. The cubs often play together practicing their hunting skills or chasing after Mum’s tail – important skills they learn early for when they leave their mother.

Go on safari in Tanzania's finest national parks from Tarangire to the Ngorongoro Crater and Serengeti, then trek for Mountain Gorillas in Rwanda's Volcanoes National Park.

Situated in a little-visited, remarkably unspoilt corner of the Serengeti, Namiri Plains is where you’ll find some of East Africa’s best big cat sightings, from lion and leopard to cheetah.

Singita Faru Faru Lodge sits on a riverbank in a private reserve adjoining Tanzania's northern Serengeti. This sensational property has 9 premium suites, a fleet of Land Rovers for game drives

Why do cheetahs jump on top of cars?

The main reason cheetahs jump on safari vehicles is because they are trying to get a vantage point to search for prey on the surrounding plains. They often use termite mounds or dead trees for this behaviour, but occasionally they will jump on a safari vehicle.. and why not? To them a car is just another stationary obstacle they can use to search for impala or Thomson’s gazelles. From time to time young cubs will follow their mothers behaviour in this, not realising they are learning a useful skill for the future.

What is a cheetah coalition?

A cheetah coalition is a group of males that live and work together as team. Coalitions are normally made up of 2-4 males (usually brothers) but sometimes unrelated males, who hunt, patrol their territory and fight off threats as a team. The more males working together, the stronger they are. There have been some male cheetah coalitions that have been able to regularly and successfully hunt much larger game including wildebeest.

When is the best time to see cheetahs?

Unlike other cats, cheetahs are generally more active during the middle of the day. They are often out hunting at this time to avoid other predators such as lions, leopard and hyena who will steal a cheetah’s hard earned kill. The other reason is because they require a long line of sight and speed to successfully hunt their prey – something they could not manage to do at night.

Need for speed
Cheetahs are the fastest land animals on earth and can reach a maximum speed of up to 120km/h or 75mp/h.

Balancing act
A cheetah’s tail is incredibly important when they are hunting. Cheetah’s often have to been incredibly agile; twisting and turning at high speeds and in quick succession when chasing prey. Their tail allows them to balance and manoeuvre the way they do.

Fast eaters
Cheetahs are at a significant disadvantage compared to leopards and lions. Once successful, cheetahs must eat as fast and as much as they possibly can before a bigger predator comes and steals their kill.

High Mortality
Sadly, cheetahs have one of the highest mortality rates amongst African animals at close to 70%. That means that roughly 1 in 4 young cheetahs survive. An ongoing threat has always been other big cats such as lion and leopard, however the growing threat is from human-wildlife conflict and loss of habitat.

Social animals
Cheetahs are often considered solitary animals, however you will regularly see more than one at a time. You will often see females wondering the plains with cubs in tow, or male cheetahs that have formed a coalition together. Young female cheetahs will often stay with their fellow brothers or sisters for a time after they leave their mother.