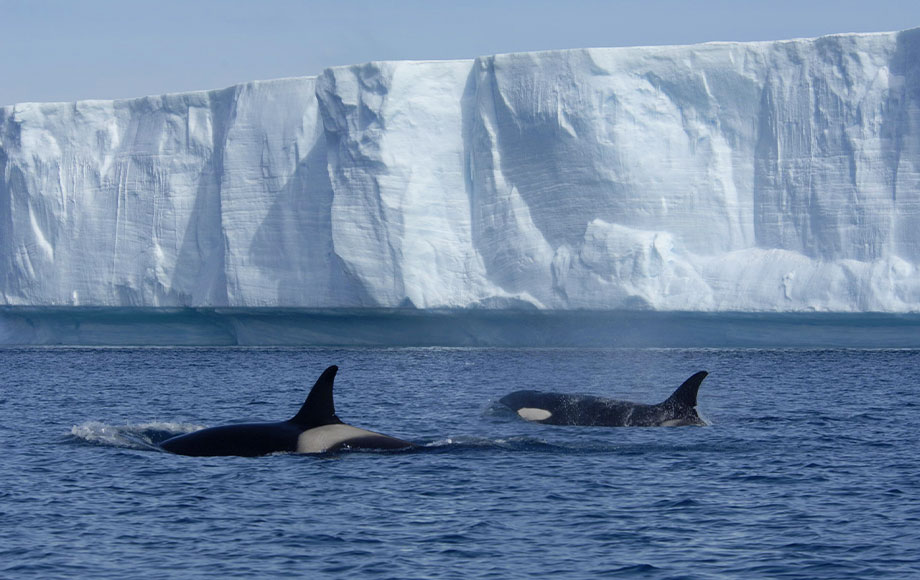 Weighing as much as 5,400 kilograms, the orca is the largest species of dolphin (rather than a whale as its nickname suggests) and one of the world’s most powerful predators. Although they often frequent cold, coastal waters, orcas can be found world-wide from both polar-regions to the equator. Orcas are immediately recognisable by their distinctive black-and-white colouring with a white highlight spot above the eyes.

Successful hunters, Orcas use surprisingly sophisticated techniques when pursuing their prey. Often referred to as ‘wolves of the sea’, orcas live and hunt together in ‘pods’, or family groups, much like a pack of wolves. Intelligent and social, they make a wide variety of communicative sounds. Each pod has distinctive noises that its members will recognize even at a distance, so as to keep in touch with one another and to coordinate their hunting behaviour. At the surface they have been known to use body language to communicate, including breaching, slapping their flippers or tail, and “spyhopping” (bringing their head out of the water).

Orcas are at the top of the food chain and have very diverse diets, feasting on fish, penguins, seabirds, seals, sea lions, walruses, sea turtles, squid, sharks and even other kinds of whales. Their teeth can be up to four inches long and are shaped for ripping and tearing prey. Sometimes, a pod of orcas will join forces to surround a larger animal, such as a blue whale. They chase, bite and wear it down until it becomes weak enough for them to feast on. They are also known to grab seals right off the sea ice. 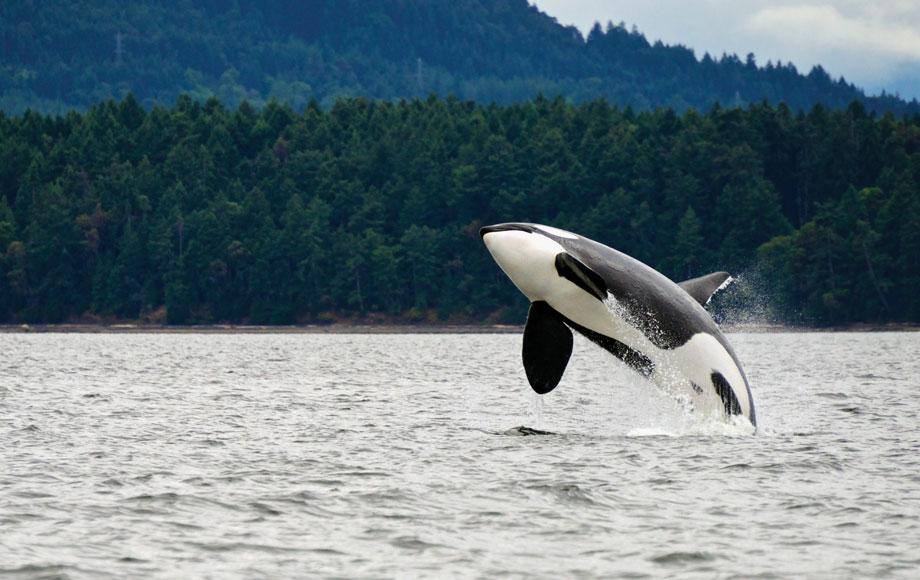 Orca viewing is typically done by small expedition cruise ship, zodiac or kayak. Getting off the vessel and into a zodiac (motorised dinghy) or kayak offers the chance to get very close to these impressive animals. There also a few remote wilderness lodges in Canada where orcas can be seen.

We offer a number expedition cruises to the Polar Regions where it is possible to see orcas. Orca sightings (and whale watching in general) around Antarctica can provide some of the best memories from an Antarctic cruise. Iceland is also a good location for orcas. For lodge-based orca and whale watching we suggest the west coast of Canada.

Explore the vast wilderness of the Antarctic Peninsula, the most accessible area of the ‘Great White Continent’.

Explore the Falkland Islands, South Georgia on a expedition cruise, the ultimate in Antarctic voyage destinations

Explore the Ross Sea on a cruise and visit explorer huts and areas of abundant wildlife including penguins, whales and other marine mammals.

A secluded lodge with a well-established reputation for excellent grizzly bear viewing from special tree stands or by boat depending on the season.

This Relais & Chateaux resort offers gourmet meals and a wealth of outdoor adventures in the heart of pristine wilderness without compromising at all on luxury.

How long do orcas live for?

Female orcas have a significantly longer lifespan than males. They undergo menopause but can live for decades after they can no longer reproduce. In the wild, female orcas live for an average of 50 years – and can even live to 80 years – while the average for males is just 30 years. 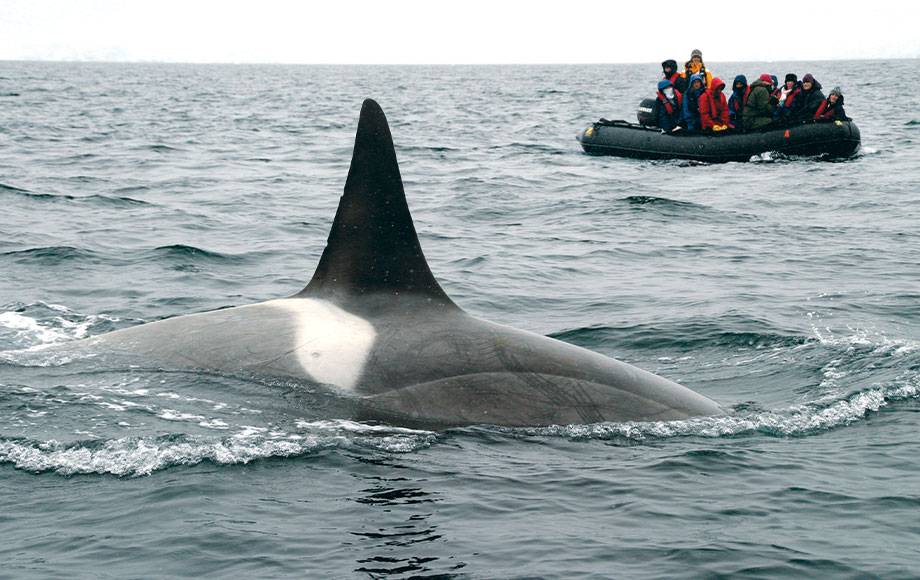 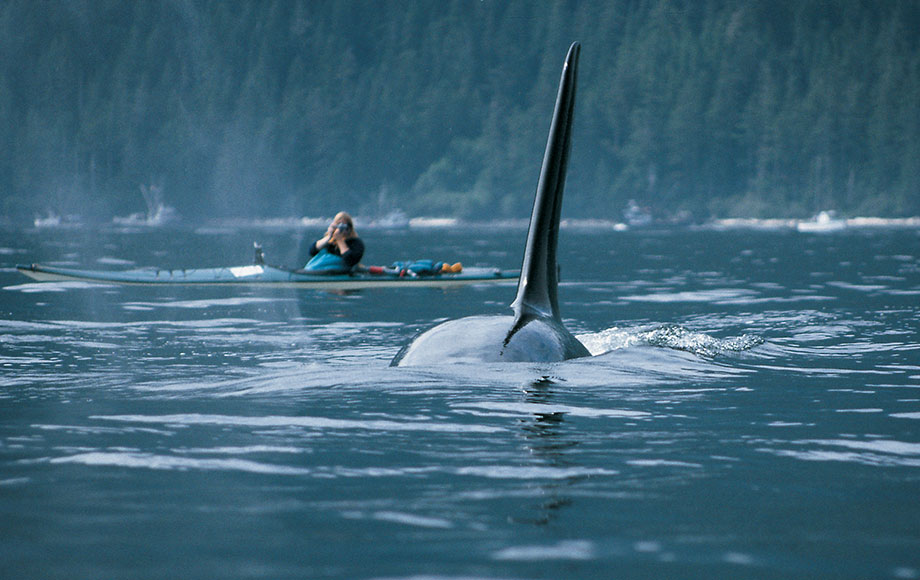 How do orcas sleep?

Unlike humans who are automatic breathers even while we’re asleep, killer whales are voluntary or “conscious” breathers, who allow only one half of their brain to sleep at a time. The unconscious side of their brain rests, while the active or conscious side regulates breathing and other bodily functions.

Adaptive hunters
Orcas will slap their tails onto the water’s surface, causing a wave to wash prey (such as penguins or sea lions) off ice floes and into the water.

As hungry as a Hippo Orca
An average-sized orca can consume as much as 227 kilograms of food a day!

Streamlined swimmers
Thanks to their large size, huge power and streamlined bodies, orcas are very fast swimmers and have been recorded at speeds of up to 54km/h.

Want to find out more about our Arctic tours?
Call one of our destination specialists on 1300 363 302.