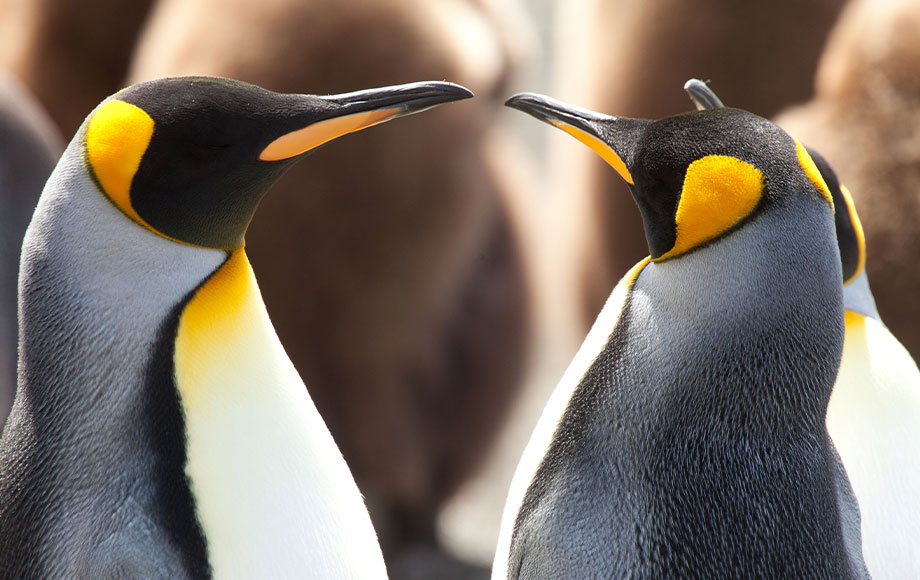 Estimated no. of mature individuals – 2.23 million pairs and is increasing

Found only in the southern hemisphere, penguins are flightless birds that are full of character. In contrast to many penguin species, King Penguins don’t actually live on the Antarctic ice shelf. Instead, they prefer the many Sub-Antarctic islands in the Southern Ocean where there are flat sandy beaches without snow or ice. This provides them easy access to the sea and a slightly warmer climate for breeding.

There are now two recognised subspecies; A. patagonicus patagonicus found at South Georgia, the Falkland Islands and in southern Chile and A. patagonicus halli at the Kerguelen Islands, Crozet Island, Prince Edward Islands, Heard Island and McDonald Islands, and Macquarie Island. South Georgia and the South Sandwich Islands are home to the world’s largest breeding colony of King Penguins, estimated to be around 450,000 pairs. Globally, the King Penguin population stands at around 1.6 million breeding pairs – a number that continues to grow.

King Penguins are the second largest of the 18 species of penguin. They have a black head, chin, and throat, bright white bellies, with vivid orange, tear-shaped patches on each side of the head. The orange coloration extends to the upper chest. At between 70-100 centimetres in height and weighing between 10-16kgs the King Penguin is approximately 25% shorter and weighs around 1/3rd less than the Emperor Penguin – the largest penguin species. King Penguin males are slightly larger than females.

To see King Penguins in the wild you need to hop on a cruise that explores some sub-Antarctic islands – on Antarctic cruises heading only to the Antarctic Peninsula you will not encounter King Penguins. One of the best choices is an itinerary combining the Falklands, South Georgia and Antarctic Peninsula (ranging between 18 and 23 days in length). Alternatively a Ross Sea voyage that includes Macquarie Island is the other option most regularly considered.

All itineraries are designed to get you off the ship and into the wilderness as much as possible. You will get the chance to go ashore by Zodiac and walk amongst the penguins, with some colonies numbering in the hundreds of thousands. The penguins are so used to human presence that you can get within mere metres, providing plenty of superb photography opportunities and memories to last a lifetime. A cruise to one of these islands where King Penguins live will literally make you feel like you are on the set of your very own wildlife documentary!

Explore the Falkland Islands, South Georgia on a expedition cruise, the ultimate in Antarctic voyage destinations

Cruise to the Sub-Antarctic Islands and explore incredible geological formations rich in flora and fauna including the Yellow-Eyed Penguin.

Explore the Ross Sea on a cruise and visit explorer huts and areas of abundant wildlife including penguins, whales and other marine mammals.

Where is the best place to see King Penguins?

The best place to see King Penguins is on the sub-Antarctic island of South Georgia, most easily accessible from Ushuaia – the tip of South America. There are an estimated 450,000 breeding pairs here. Alternatively, Macquarie Island most easily accessed from New Zealand or Tasmania is another fantastic option to see these beautiful penguins. 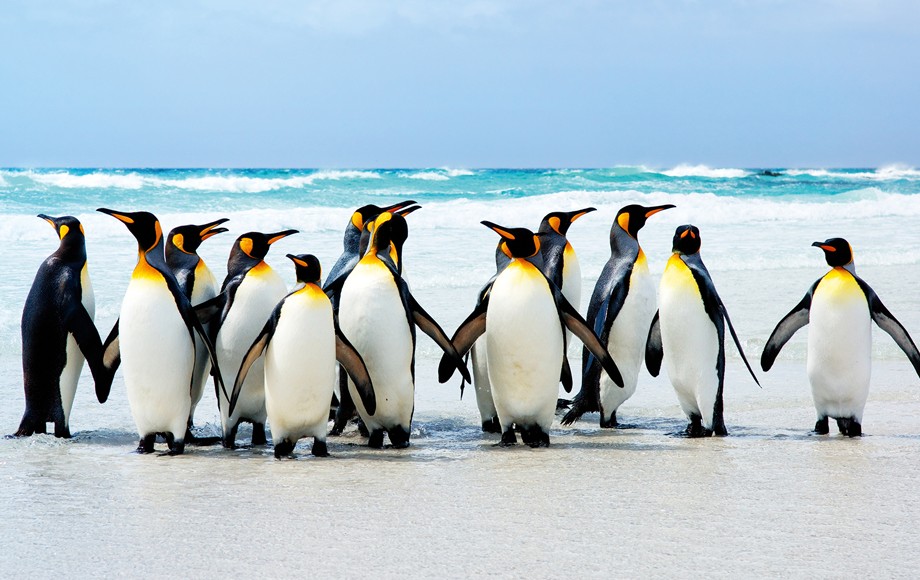 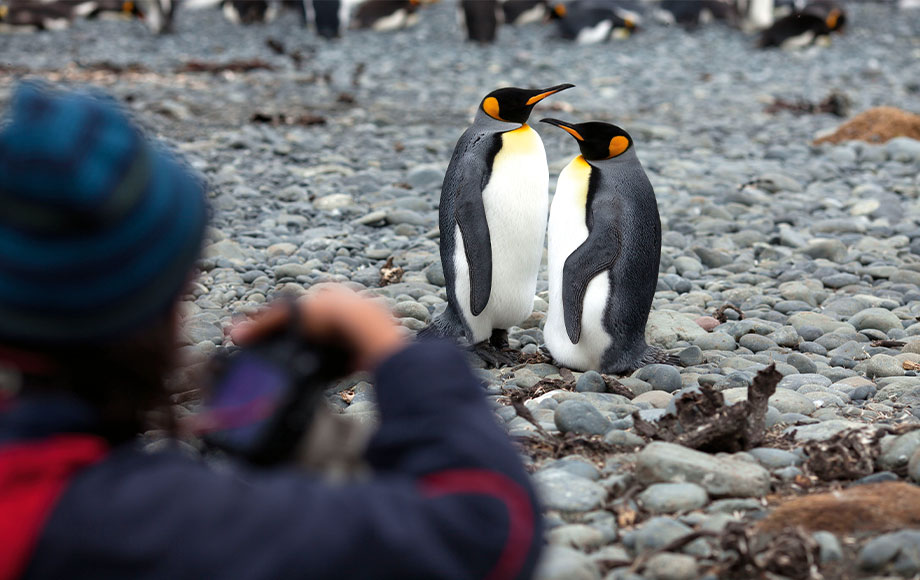 When is the best time to see King Penguins?

The best (and only) time cruises operate is during the Southern Hemispheres summer months November to March. The population of King Penguins from December to February is at their highest with thousands of chicks often covering the entire landscape. It can be quite overwhelming to be standing on the beaches or hills and looking across a plain with every square foot covered with birds.

The life cycle of a King penguin

Unlike other penguin species, King Penguins will change partners each breeding season rather than staying loyal for life. When they come in to shore during the mating season they form gigantic colonies. Like Emperor Penguins, King Penguins do not build nests. When the single egg is laid, the male and female take it in turns to incubate the egg on the tops of their feet under a loose fold of abdominal skin called a brood patch. Each parent holds the egg for around one to two weeks at a time while the other goes to sea in search of food. The egg weighs approximately 300 grams and hatches after roughly 50-60 days. The King Penguin has the longest breeding cycle of all the penguin species lasting between 14 and 16 months, therefore colonies are active year-round so no matter when you visit, there are chicks present, young and old.

The chick is dependent upon its parents for survival for the next 40 or so days. The young chicks will then create their own community, known as a crèche. This behaviour is for their own survival until they grow their feathers out, huddling together for warmth as well as protection from predators. Once a young King Penguin does leave its colony it will not return until at least 3 years later when it is able to mate.

What do king penguins eat?
Fish makes up about 80% of their diet, however the penguins can be particularly picky, and mainly eat lantern fish. They also enjoy small squid, krill and crustaceans. Research has shown that during winter squid makes up a larger percentage of their diet.

How fast can King Penguins move?
Their average cruising speed while swimming ranges between 5-10 km/h. On land King Penguins are slow walkers and tobogganers as opposed to some other penguin species that prefer to hop around.

Do King Penguins have any natural predators?
In the ocean these penguins are mainly preyed on by orcas and leopard seals. On land, seabirds such as giant petrels and skuas will snatch small chicks and eggs if left unattended.