One of Africa’s most recognisable animals, the Giraffe

With their unique and beautiful colouring, giraffes are one of Africa’s most recognised animals. As the tallest animals on the planet, standing at between 14 and 19 feet (4.2 to 5.8 metres) they’re hard to miss. They use there impressive height to browse on leaves and shoots from the very tops of trees that few others can reach – a favourite of giraffes is the acacia tree. The other adaptation that helps giraffes feed on these leaves is their 21 inch tongue – which is very rough, protecting it from thorns. Given their size, giraffes are almost continuously eating in order to consume enough food. As a result, they have cover large distances to find enough. 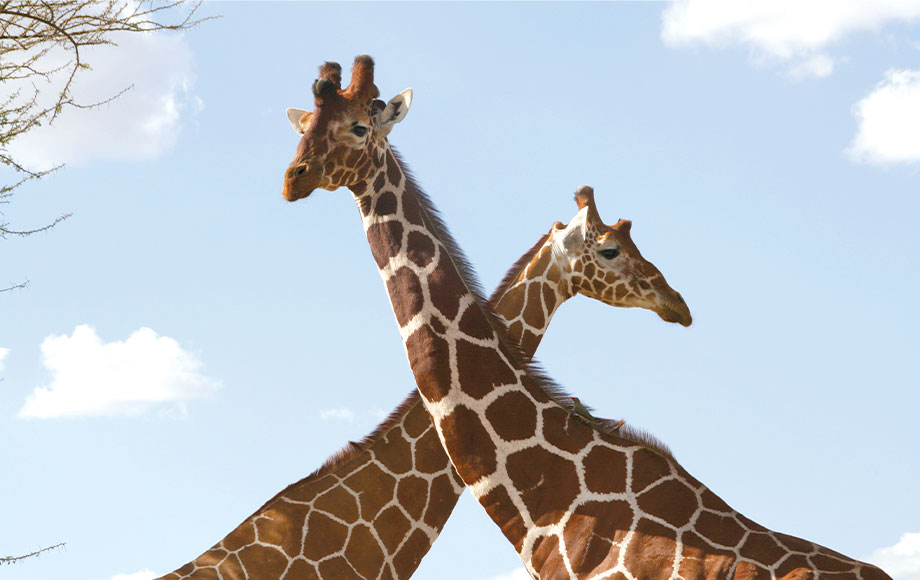 Estimated no. of mature individuals – 68,000 – studies suggest a declining population.

Though there are few predators to worry about, giraffes do keep a look out for big cats – some lions have been known to specialise in hunting giraffe. This is particularly true when it comes to drinking from rivers or shallow pools. Their large hulking frames put them at a significant disadvantage and to drink at a water source, they must spread their legs awkwardly to bend down and drink – making them vulnerable to predators. To combat this need for water, giraffes absorb most of their water from plants and therefore do not need to drink from a water source every day.

Giraffe viewing depends on where you are in Africa – as there are 9 subspecies of giraffe. Recent research has suggested however that some of these may actually be distinct species in their own right. Physically, giraffe subspecies differ in their size and pattern. The two most common species in East Africa (Kenya and Tanzania) is the Masai giraffe and the Reticulated Giraffe. The Masai giraffe is significantly darker than other species while their patches have a distinct vine leaf shape with jagged edges. The Reticulated giraffe, found in central, north and north-eastern Kenya is recognisable by its neat and clear orange-brown patches, which are separated by clear white lines.

Contrary to the two species mentioned above, the South African giraffe (found throughout many southern African countries) has distinct patches in varied shapes and sizes that spread down its legs.

Non-territorial, giraffes are gregarious animals that often live in groups (called towers) ranging from 5 or 6 up to 20 individuals – if you spot one giraffe you are likely to spot a few more nearby. They can be found in many national parks and reserves throughout Africa in varying numbers. Renowned Giraffe Manor holds the unofficial title of the most “unforgettable bucket-list breakfast experience in the world” for good reason. The property is a sanctuary for the highly endangered Rothschild giraffe who join guests for a memorable breakfast, poking their heads through the windows in search of a snack. 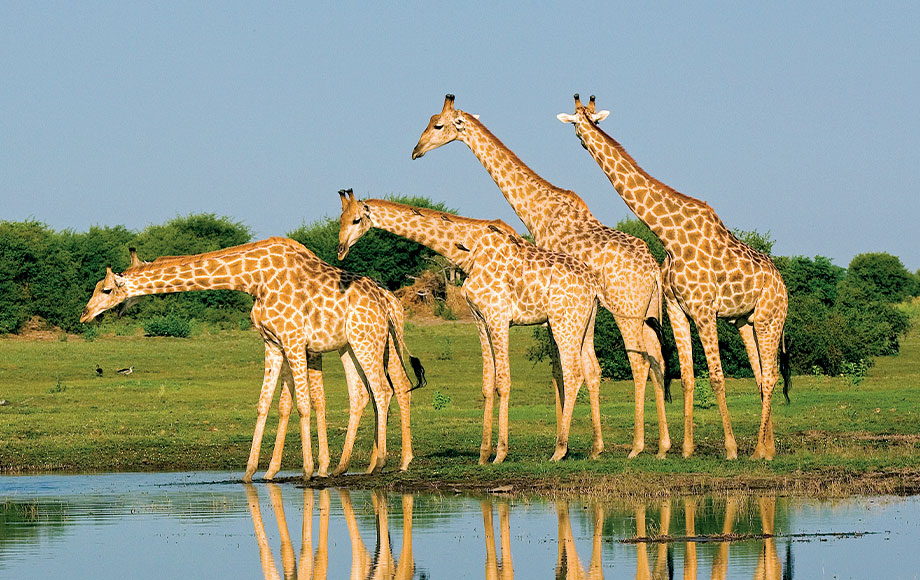 Selinda Camp is located in the breathtakingly unspoilt Selinda Reserve, home to some of Africa’s largest herds of elephant and buffalo, as well as rare African wild dog.

Sitting at the top of an escarpment with sweeping views across the perennial Tarangire River and valley below, Lemala Mpingo Ridge offers not just sensational views but outstanding standards of

Shaded by doum palms on the banks of the Uaso Nyiro River, upscale Elephant Bedroom Camp occupies a prime position in the stunning Samburu National Reserve.

Where is Giraffe Manor?

Giraffe Manor is one of the most sought-after hotel stays in Africa. It is an exclusive boutique hotel located in the suburbs of the Kenyan capital of Nairobi. Built in 1932 as a colonial hunting lodge, today Giraffe Manor is a Nairobi icon and offers one of the city’s most special experiences. What sets Giraffe Manor truly apart is its herd of endangered Rothschild’s giraffe, who are known to join guests for breakfast or for a cheeky snack through open windows or doors. Giraffe Manor is a fantastic addition at the beginning or end of any Kenyan safari.

Fighting Gravity and adjusting pressure
Giraffes have a number of unique adaptations in their circulatory system to fight against gravity in order to pump blood. Elastic and muscular arteries above the heart pump blood up the neck –fighting against gravity. The arteries below are the opposite – narrower with thick walls – that can bear high pressure, preventing blood from pooling. Giraffes have a complex network of elastic vessels that expand when they lower their heads, this prevents blood from flooding the brain.

Super Heart
Relative to its size, the giraffe has quite a small heart – weighing just 11 kilograms. Giraffes have extremely high blood pressure (twice that of a humans) as they need to maintain blood flow against gravity. Looking more closely, the left ventricle of the heart has thick muscular walls in order to pump blood up to the head and then around the body. In comparison, the right ventricle is thinner and only pumps blood to the lungs. Their heart beats up to 170 times a minute. 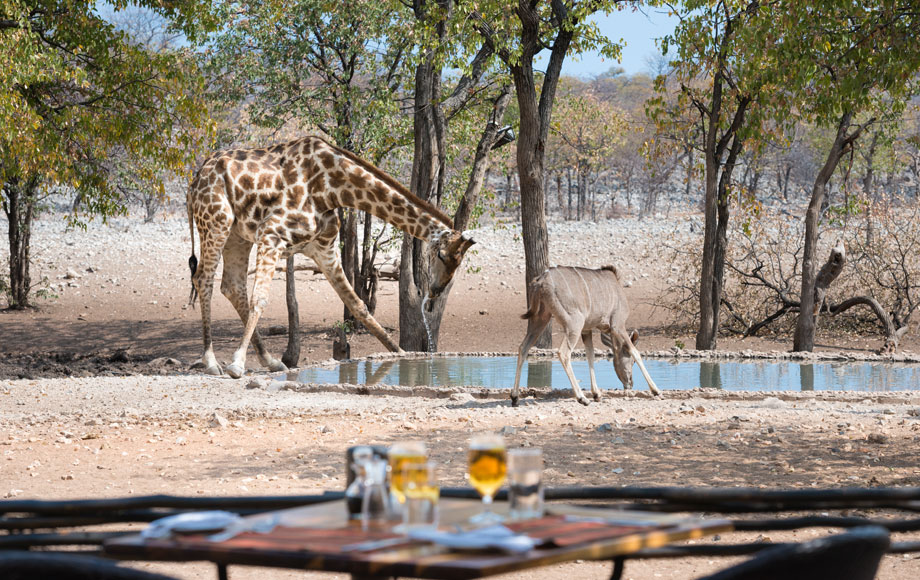 Tallest Animal
Giraffes are the tallest mammals on Earth, standing at between 14 and 19 feet (4.2 to 5.8 metres) they’re hard to miss!

Standing sleepers
Adult giraffes require less sleep than other mammals. There is some debate as to the exact amount, but research has suggested it is somewhere between 1 to 3 hours in a 24 hour period. Most of this sleep however is taken in short naps while they stand. They will arch their necks around and rest their heads on their rear end.

Surprisingly speedy
Ungainly in appearance and particularly when in motion, giraffes don’t appear at first glance to be the fastest runners. However, their long legs do along them to reach a top speed of 35mph (56 kph), but only for a short time.

Horns? What horns?
A giraffes “horns” are actually knobs that are covered with skin and hair. These knobs protect their head and eyes from injury.