Discover the best safaris and luxury accommodation in Tanzania

Tanzania is world-famous for its jaw-dropping scenery, density of wildlife and fascinating tribal peoples. The country’s northern safari areas are the most visited, with sweeping, game-covered plains set against soaring escarpments and towering volcanic mountains. Here the Great Rift Valley forms a magnificent backdrop to wildlife reserves like the Serengeti and Ngorongoro Conservation Area. Snow-capped Mount Kilimanjaro, Africa’s highest mountain at 5,895m, is a mecca for avid trekkers and mountaineers.

Tanzania’s national parks are a haven for huge concentrations of animals and birdlife. The Serengeti National Park alone has nearly 2 million wildebeest and zebra which migrate along age-old pathways, followed by opportunistic lion, cheetah, leopard, hyena and jackal. The famous Ngorongoro Crater is a massive volcanic caldera where 25,000 animals live in a setting of unparalleled grandeur. Maasai tribal people have inhabited this region for hundreds of years, and to this day still herd their cattle amongst the native wildlife. A visit to a local village to learn about their culture and way of life is an eye-opening experience.

Other major wildlife areas include beautiful Lake Manyara and Tarangire national parks – both very different environments. Lake Manyara is surrounded by grassy floodplains and groundwater forest; it is home to many hippo, tree-climbing lions and is a haven for birdlife. Tarangire National Park is renowned for its large elephant herds, strange baobab trees and bright red soils. On the western border, between the Mahale Mountains and Lake Tanganyika, lives one of Africa’s largest populations of wild chimpanzees. A safari here is a remarkable experience.

Just off Tanzania’s east coast on the Indian Ocean lies the ‘spice island’ of Zanzibar. The old Stone Town is a UNESCO Heritage listed site and a tour of the town reveals its complex history. The island also boasts white sand beaches, clear, turquoise water, and beach hotels offering barefoot luxury; a relaxing conclusion to any East African safari.

A mosaic of diverse ecosystems, the Ngorongoro Crater is home to some 25,000 large animals including all of the “Big 5". We offer accommodation

Scenic Lake Manyara National Park lies in the shadow of a 600m-high escarpment and is famous for flamingos as well as tree-climbing lions.

Situated in the Great Rift Valley, Tarangire National Park features very different scenery to the Serengeti and other northern parks. Explore its

The Nyerere and Ruaha are two immense wildlife reserves in Tanzania’s remote south. They offer vast numbers of game that are best appreciated

Mt Kilimanjaro is Africa’s tallest mountain and one of the world’s highest free standing massifs. It is a mecca for trekkers and a number of

Lying 25km off the east coast of Tanzania, the Zanzibar archipelago comprises of Unguja, Pemba and an array of small, tropical islands. Discover

Explore some of the experiences that we can custom-design for you. All of our safaris and tours are tailor-made to suit your interests, budget and timeframe.

This epic itinerary encompasses an epic five-country train journey aboard the Rovos Rail, a safari in Tanzania's Ngorongoro Crater and Serengeti as well as a beach getaway on the Indian Ocean coast.

Go on safari in Tanzania's finest national parks from Tarangire to the Ngorongoro Crater and Serengeti, then trek for Mountain Gorillas in Rwanda's Volcanoes National Park.

Discover the world-famous parks of northern Tanzania, including beautiful Tarangire, the celebrated Serengeti and Ngorongoro Crater.

There is no place that does safari luxury better than Africa, and Tanzania is no exception. From rustic bush camps to elegant lodges and luxury tented camps, we offer a carefully curated portfolio of safari accommodation. Most are small, intimate properties that accommodate between 14 and 30 guests. What they all have in common are outstanding locations, including their proximity to good game areas. Many are located along rivers or on hilltops, making the most of the awe-inspiring scenery. Guests can expect first-class service, good food, premium amenities and the luxury of an intimate and exclusive location away from public areas.

In the rarely visited west of Tanzania, Greystoke Mahale offers 6 simple tented suites on a white sand beach lapped by Lake Tanganyika, with the looming Mahale Mountains as a backdrop. Trek for

Offering perfect seclusion, this intimate tented camp is perched on a ridgeline of granite kopjes in Tanzania’s southwest Serengeti.

Sayari Camp offers 15 stunning tented guest suites, exceptional gameviewing on the plains of the northern Serengeti and easy access to the Mara River and its infamous croc-filled crossing points.

Singita Faru Faru Lodge sits on a riverbank in a private reserve adjoining Tanzania's northern Serengeti. This sensational property has 9 premium suites, a fleet of Land Rovers for game drives

When is the best time to visit Tanzania?

Tanzania is a true year-round safari destination. Choosing where to go will depend on the season and what sort of wildlife you wish to see – whether it’s the wildebeest migration, chimpanzees or just good all-round game viewing.

The annual wildebeest migration in the Serengeti ecosystem is always a big attraction and usually means more safari visitors. The herds of wildebeest and zebra move with the rains in search of fresh green grass so the time of year dictates which lodges and camps to visit.

Considered by many as the peak time to travel. The Great Migration is heading north through the Western Corridor towards Kenya’s Masai Mara and there are plenty of chances to see river crossings. Due to the lower rainfall, animals are also congregating around the remaining water sources making game-viewing excellent. This is also the best time to see the chimpanzees in the Mahale Mountains National Park, in the country’s west, when conditions are at their driest.

River crossings can be seen in Northern Tanzania as the wildebeest begin to travel down from Kenya towards the southern and eastern Serengeti. The rains start to pick up at this time of year.

An excellent time to visit Tanzania when the migration is in the south-eastern Serengeti. Though it is the Green Season, many travellers take advantage of the lower prices and the fact that there are fewer travellers. These are the months when the wildebeest, zebra and gazelles mass on the rich volcanic plains and can be seen in huge numbers. This is also the time to see predators like lions, cheetah and hyena which follow the herds. February is when the herds are calving, and visitors may get to see some animals taking their very first steps.

Can I see the Big 5 in Tanzania?

Tanzania is home to all members of the legendary ‘Big 5’: lion, leopard, elephant, rhino and buffalo.  All apart from rhino, plus many other species, can be seen in Tanzania’s best game areas. The Ngorongoro Crater is the best place for seeing endangered black rhino, as they can’t move from the crater floor. Please note that the seasons, rainfall and drought can affect game movements. Our knowledgeable Destination Specialists know the best time of year to visit and where to see particular game species.

When is the best time to see the Great Migration?

The great wildebeest and zebra migration is a natural event and therefore their exact location can never be 100% predicted. The wildebeest mass in certain areas of the Serengeti Ecosystem (made up of the Serengeti National Park, Ngorongoro Conservation area and Kenya’s Masai Mara) at different times of the year. The below map shows historically, where the wildebeest and zebra will be, based on the time of year. If you are interested in learning more, or in seeing the Great Migration please contact one of our staff who are always happy to chat. 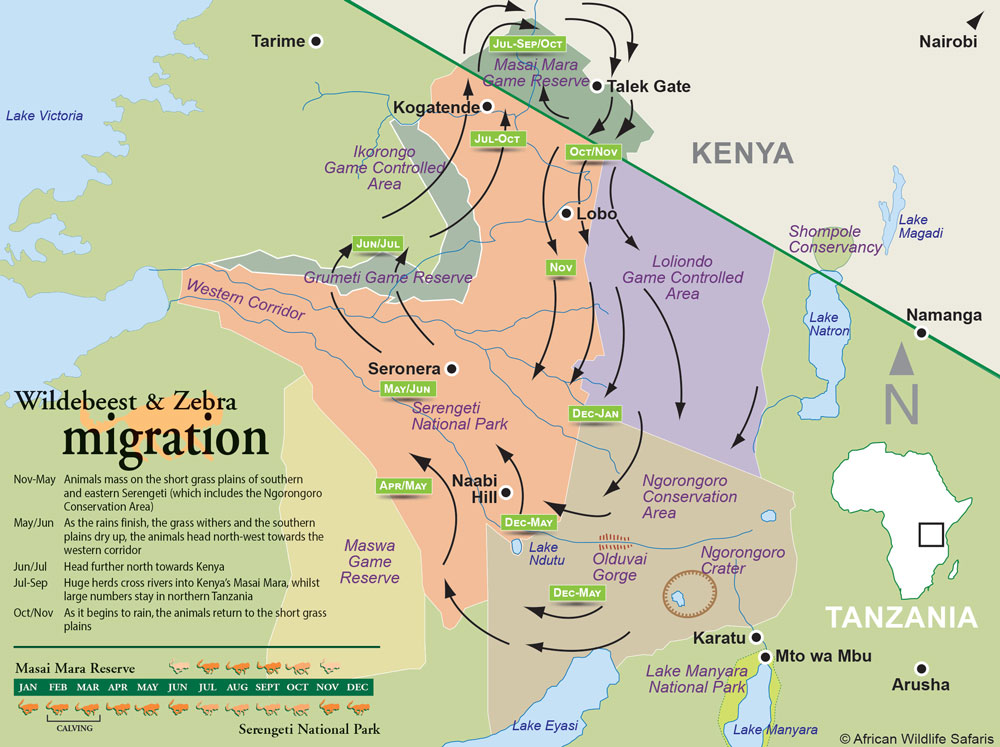 Where can I see chimpanzees in Africa?

Chimpanzees can be seen in several countries within Africa, including Rwanda, Uganda and Tanzania. There are a number of groups that have become habituated to humans, and one of the best places to see chimpanzees is at the unique Greystoke Mahale lodge, on the shores of Lake Tanganyika in Tanzania’s Mahale Mountain National Park.

What can I combine Tanzania with?

Tanzania is often combined with other countries including neighbouring Kenya or either Uganda or Rwanda for a trek to see the gorillas. A few days on the beautiful beaches of Zanzibar is a very popular way to end a Tanzanian safari.

What is the best thing to do in Tanzania?

A wildlife safaris is an absolute must as Tanzania is one of Africa’s great wildlife destinations. Witnessing tens of thousands of wildebeest and zebra in the Serengeti is an unquestionable highlight, whilst the Ngorongoro Crater is one of the natural wonders of the world. A trek to the top of Africa’s highest peak – Mount Kilimanjaro – is a bucket-list experience for any adventure enthusiast.

How do I get to Tanzania?

There are only two European airlines – KLM Royal Dutch Airlines and Turkish Airlines – that fly directly into the country. Otherwise, flying via the Kenyan capital of Nairobi (where far more major airlines fly to including British Airways and Air France) is another option. From here travellers can then fly to numerous airports in Tanzania.

For travellers coming from the United States at least one stop is required. The easiest airlines for connections are either with KLM or Qatar Airways via Doha. From Doha there are also direct flights to Kilimanjaro International Airport.