Impressively large and with horns for a nose, the prehistoric looking rhino is one of Africa’s most iconic animals.

Impressively large and with horns for a nose, these prehistoric looking creatures are one of the most iconic African animals. In fact, there are five species of rhino in the world, three in Asia and two species in Africa, all of which are endangered.

At the beginning of the last century there were about 500,000 rhino on earth, but as a result of trophy hunting and poaching for their valuable horn their numbers have dwindled to just a few thousand.

The two African species are the white or square lipped rhinoceros (Ceratotherium simum) and the black or hook-lipped rhinoceros (Diceros bicornis). Despite their huge size they eat only plants, which they pluck with their lips as they have no front teeth.

The biggest threat to rhinos in Africa today is the illegal trade in their horn.  In some countries the horn is considered a status symbol or (erroneously) is highly prized for medicinal purposes. The fact that it is formed from keratin like our hair or fingernails and has been shown to have no medicinal value does not seem to influence the trade. The amazing work done by conservationists is having some success in protecting rhino in Africa, however it is a constant and very costly battle. It also takes its toll on the rangers who protect the rhino, as many have lost their lives in the line of duty.

The white or square lipped rhino are grey in colour like their cousins. The confusion may have come about due to the Dutch word for wide – wijd – or the Afrikaans word – wyd, which is pronounced vate. White rhino have a wide mouth and usually graze on grass, whilst their cousins the black rhino have a hooked lip and usually browse on leafy bushes. Being grazers white rhino are usually found in larger numbers out on the grassland and are more sociable, whereas black rhino tend to be more solitary.

There are two subspecies of white rhino: the northern and the southern. The northern white rhino is almost extinct, with just two animals left, both females, which live on the private Ol Pejeta Conservancy in Kenya and are guarded 24/7. The southern white rhino however has been a conservation success story. Due to the persistent efforts of conservationists the numbers of white rhino are now about 21,000 and increasing. Most are found in private reserves in South Africa, Namibia, Zimbabwe and Kenya. 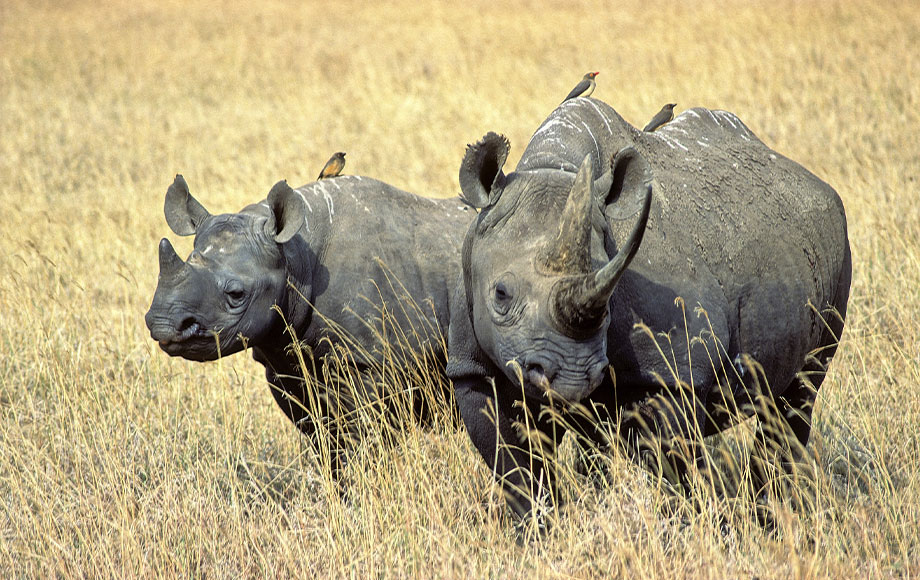 Black rhino are slightly smaller than their cousins. They are native to East and Southern Africa and live in a variety of habitats from forest and woodland to dry savannahs. However, they are critically endangered with only a few isolated small populations remaining in protected private reserves.

South Africa’s Kruger National Park and surrounding private reserves are the best places to see both white and less frequently black rhino. In Namibia you can also see white rhino, and sometimes black rhino, in Etosha National Park. In East Africa, Tanzania is one of the best places to see rhino, particularly inside the famous Ngorongoro Crater which has a small population of black rhino. In Kenya white rhino can be seen quite easily in Lake Nakuru National Park. The private Ol Pejeta Conservancy on the Laikipia Plateau near Mount Kenya is a haven for rhino, with some southern white rhino (introduced from southern Africa), some black rhino as well as the world’s last two northern white rhino (both females).

Family-owned and operated, Makutsi Safari Springs is a private reserve which has a very similar ecosystem to neighbouring Kruger National Park. This delightful property encompasses a number of

Sabi Sabi Earth Lodge has been described as the most environmentally sensitive luxury safari lodge in all of Africa.

Nestled on the banks of the iconic Zambezi River in the heart of Zambia’s scenic Mosi-oa-Tunya National Park, Toka Leya Camp is just 12km upstream from the awe-inspiring Victoria Falls.