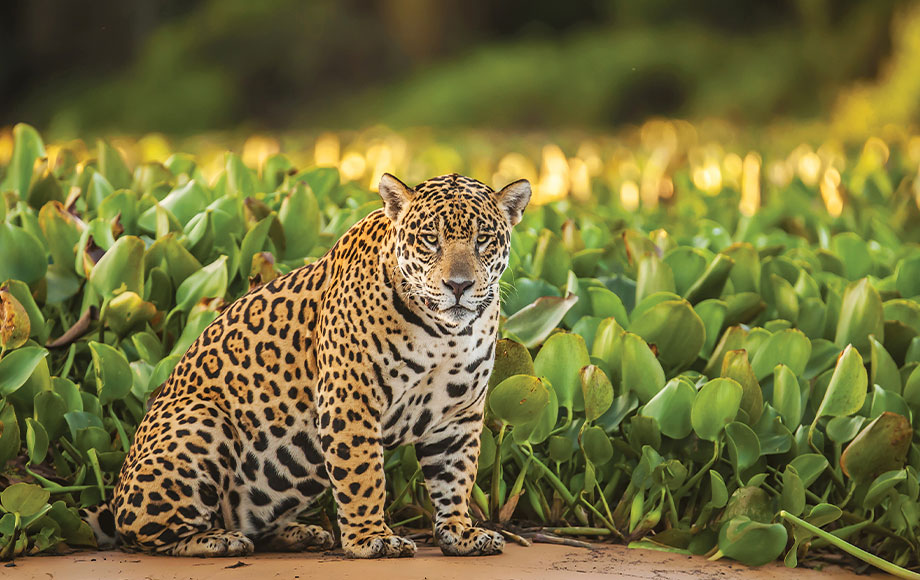 Estimated no. of mature individuals – unknown

The largest cat in the Western Hemisphere, jaguars are strongly built, well-muscled predators native to the Americas. They are the third largest cat in the world, after the tiger and the lion. The jaguar’s range extends from southern USA across Mexico and through Central America to the Amazon rainforest, Brazil’s Pantanal and northern Argentina. It inhabits a variety of forested and open terrains, but its preferred habitat is tropical forests, wetlands and wooded areas.

Like leopards, jaguars use a stalk-and-ambush strategy when hunting, getting as close as they can to their prey – rather than chasing prey. They can hunt at all hours of both the day and night and can travel in excess of 10 kilometres a night when hunting. Jaguars are not fussy eaters, and will take any opportunity for a meal if it arises. They will eat anything including capybaras (the largest living rodent), deer, tortoise, armadillos, fish, birds, monkeys. Jaguars will also attack caiman that are in the water or sunbaking on the sandy riverbank – in fact they have been known to launch themselves off the bank and into the river to catch them. The jaguar attacks from cover and usually from a target’s blind spot with a quick pounce. Similar to a leopard after a successful hunt, the jaguar will drag the carcass to a secluded spot.

When jaguars seek a mate, males and females call loudly back and forth. When they come together, they can mate up to 100 times a day, to ensure copulation is successful. They then go their separate ways, and the males leaves the female to raise the young on their own. Pregnancy lasts for around 14 weeks and females give birth to two or three cubs (sometimes four). The cubs are tiny at birth (600-900 grams) and are about the same size as a loaf of bread. The cubs eyes remain closed for approximately two weeks. During the first 2 ½ – 3 months (until the cubs are fully weaned) the mother jaguar will not move far from the den – and will even move the cubs to a new den if she thinks they are in danger. The cubs will also begin to eat meat at this time. The cubs remain with their mother until around 2 years of age.

Jaguars are solitary cats. Males only seek out females when they come together to mate – and sightings of mating jaguars are rare. The only other time you will see jaguars together is when a mother is with her cub (or cubs).

One of the best places to see jaguars in the wild is in Brazil’s Pantanal – a vast area of open wetlands covering some 195,000km² of central South America. The Pantanal is home to an estimated 4,000-6,000 jaguars, and they are known to be some of the largest in the world (weighing far more than a male leopard).

The best way to view these majestic cats is by staying on the edge of the Pantanal in a remote eco-lodge. The lodges operate daily jaguar safaris by river boat, cruising the waterways in search of these elusive cats. Travelling through the wetlands also offers a chance to see other wildlife such as giant river otters and countless bird species.

It’s been 70 years since jaguars have been present in Argentina’s remote Iberá Marshes. However after a 10-plus year rewilding effort (pioneered by Tompkins Conservation) jaguars are starting to return to this remote area. In 2018 the Argentinean Government created the Iberá National Park, which now protects over 1600 square kilometres of precious wetland, grassland and marshland. The Iberá National Park is an area to consider for future jaguar safaris.

Quote: “The jaguar sightings were the highlight. We saw nine jaguar in five days, but the sheer diversity of wildlife was extraordinary” Geoff Putland (on the Pantanal)

Discover Brazil's magnificent Pantanal and encounter the most powerful predator in the Americas – the jaguar.

Brazil is renowned for its biodiversity and has three major biomes each with distinctive landscapes and a diverse range of animals and plants.

A mighty name
The word ‘Jaguar’ comes from the indigenous word ‘yaguar’. It translated to mean “he who kills with one leap” – which is all too accurate when it comes to these impressive predators.

Excellent swimmers
Jaguars thrive living near rivers and wetlands and, unlike many other wild and domestic cats do not avoid water. Jaguars will launch off the river banks into rivers in order to catch caiman. They are confident swimmers and will swim across rivers or out to small islands.

Black Panthers
Like African leopards, jaguars can be “melanistic” – the increased prominence of the dark-coloured pigment melanin in the skin or hair. This means that the jaguars appear almost black, with their rosettes barely visible. These jaguars are therefore termed “black panthers”

Varied sizes
The size of jaguars can vary dramatically between regions. Jaguars in Brazil’s Pantanal wetlands are considered the largest in the world, whilst jaguars found in Central America can be roughly half the size.