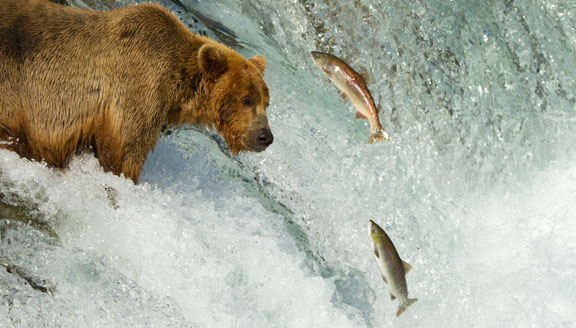 Current IUCN Red List Status – LC – Population stable but in the USA they are listed as endangered.

Estimated no. of mature individuals – Around 55000 wild grizzly bears in North America.

Grizzly bear or grizzly is the name given to the subspecies of brown bear that inhabits North America. The name is given to describe their sort of grizzled appearance. Their fur is white-tipped and can give a “grizzled” look, especially when backlit by the sun. Aside from their colouring, their distinctive hump (a mass of muscle that attaches to their backbone) also distinguishes them from black bears.

About the Grizzly Bear

Grizzlies live in woodland areas (such as boreal or alpine forests) close to rivers, streams and estuaries. They also live in lightly wooded meadows. In North America the largest populations in the wild can be found in Canada and Alaska – Canada has an estimated population of 25,000 whilst Alaska is 33,000. It is thought that there are around 1200 to 1400 living in mainland USA – primarily in the north-western states of Montana, Wyoming, Washington and Idaho.

Male grizzly bears generally weigh between 180-360 kilograms, while females are between 130-200 kilograms. Studies have shown significant differences in size between inland and coastal populations, finding that bears living on the coast were larger. Over the late summer and early autumn months (July-September) grizzlies feed exclusively on salmon, and gain significant weight before they go into hibernation. The bears hibernate over the winter months in a large den they dig themselves – using their long claws and strong shoulder muscles.

It is during these winter months that pregnant females give birth to young cubs in the den (usually two cubs but sometimes more). The mother feeds the cubs on her reserves – losing up to 40% of her pre-hibernation weight – emerging from her winter hideout significantly lighter. In spring they can be seen feeding on sedge grass along the edge of rivers and creeks. 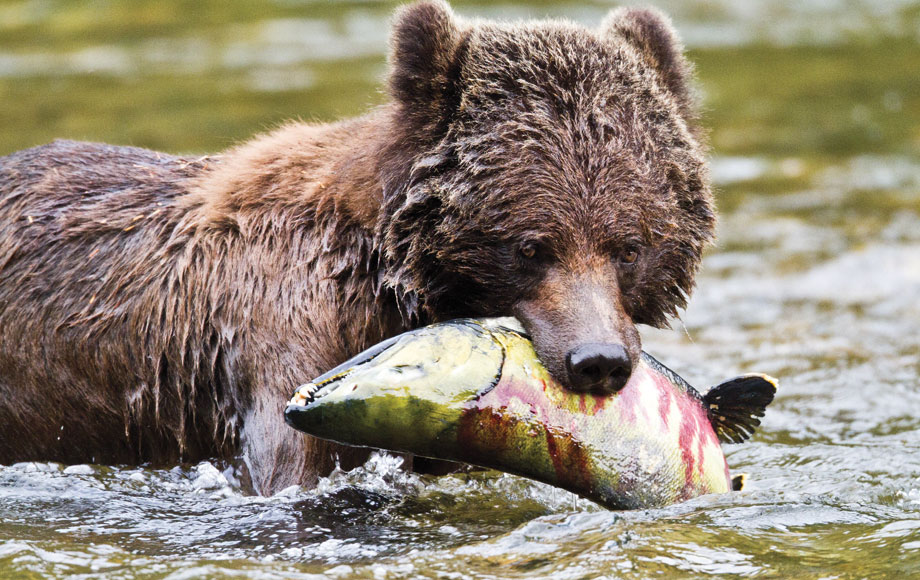 The sub-species of brown bear that inhabits Alaska’s Kodiak Archipelago is called the Kodiak Brown bear. Though physiologically similar to the mainland grizzly bears, the main difference between the two subspecies is the size – Kodiak Bears are significantly bigger. They can commonly reach sizes of up to 600 kilograms.

There is fabulous grizzly bear viewing between May and October across many parts of both Canada & Alaska. However it’s difficult to go past the Canadian province of British Columbia. The optimal time to see them is during autumn (fall) beginning in late August and running through to mid-October. It is during this time that the bears converge on streams brimming with salmon for their annual feeding frenzy. Bear tours during this time are down either by boat, on foot or on specially-built viewing platforms.

Spring is also a terrific time for bear viewing, as mothers with their young cubs venture into the estuaries to feed on the fresh sedge grassed. Playful sub-adults are also out during this time. It is an exciting time to see bears particularly the interactions between the newborn cubs that are incredibly cute.

The best place to see Kodiak brown bears is in Alaska’s Katmai National Park – which claims to have “the world’s most spectacular bear viewing”. There are more than 2,200 bears found in the park, and as they are not hunted and there is plentiful food during the summer months (May-September) the bears are extremely tolerant of humans. There are just a handful of lodges located in the park making bear viewing a very exclusive experience. 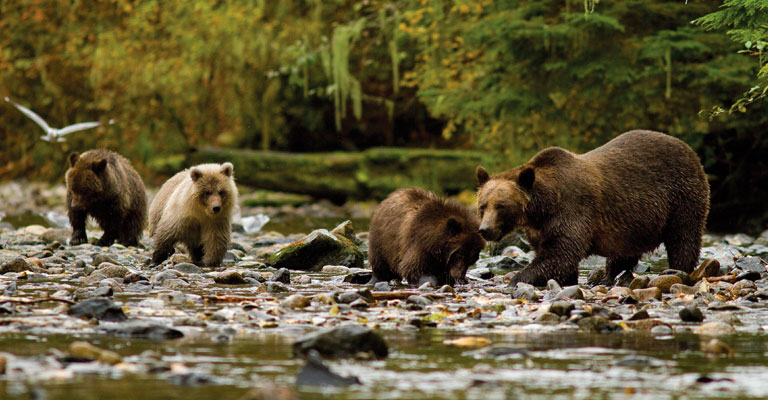 Amongst the finest bear viewing destinations in Alaska, Katmai Wilderness Lodge is also one of the few lodges within Katmai National Park.

A secluded lodge with a well-established reputation for excellent grizzly bear viewing from special tree stands or by boat depending on the season.

This Relais & Chateaux resort offers gourmet meals and a wealth of outdoor adventures in the heart of pristine wilderness without compromising at all on luxury.

Running machines
Despite their awkward shape and magnificent size, grizzly bears are surprising good runners. They can reach speeds of up to 50km/h (30m/h).

Different coloured coats
The colour of a grizzly bears coat can vary significantly, from a light, creamy-yellow to a very dark brown (almost black).

An all you can eat buffet
During the autumn months (late-August to mid-October) the bears consume vast quantities of salmon in their annual feeding frenzy in preparation for winter hibernation. During this time, they can consume over 40 kilograms of food a day.

Katmai National Park – Fat Bear Week
Every year in late-autumn (fall) after the annual salmon feast, the park runs its annual competition – Fat Bear Week. This sees the parks resident Kodiak brown bears pitted against each other in a completion to see who the fattest bear is!