Lemurs are the world’s most endangered primates. 33 lemur species are Critically Endangered, with 103 of the 107 surviving species threatened with extinction. 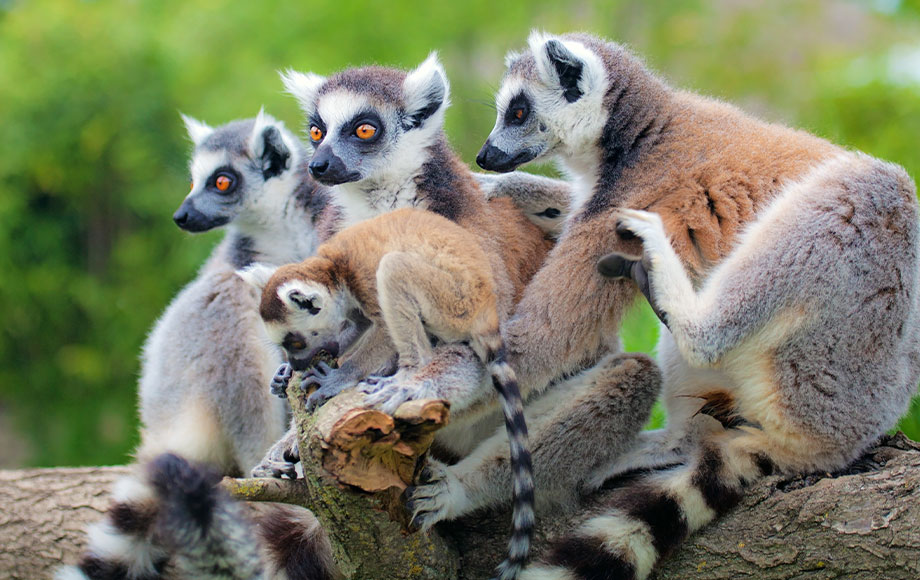 Lemurs are endemic to the island nation of Madagascar, located off the east coast of Africa. There are 107 species of lemur that can found on the island, but each individual species is often only found in a particular region. The terrain of the country varies from dense rainforests, favoured by Bamboo lemurs and the Indri, to dry forest areas where you may see the famous ring tailed lemur or the sifaka. In the wild, lemurs tend to live on average for between 16 to 20 years, depending on the species. In captivity they can live up to 30 years. Size and diet can vary greatly between lemur species; for example the smallest is the mouse lemur at just 30 grams whilst the largest is the Indri, at close to 9 kilograms. Generally, smaller species are primarily omnivores, consuming fruit and insects, while the larger species are more herbivorous, consuming mostly plant material.

As lemurs spend most of their time in the trees, the way to see them is on foot.  Treks range from challenging, in the dense rainforest regions, to more leisurely walks in the drier lowlands. The different national parks across the country offer unique experiences and different species can be see within the different parks.

Ranomafana National Park is a less visited park due to its remote location and more challenging walks, but it is well worth a visit as it offers the opportunity to see some of the rarer species such as the critically endangered Bamboo Lemur. For more easily accessible lemur viewing with high a probability of sightings, Andasibe National Park has walks for all abilities. The park also has a fantastic variety of lemur species to be seen including the teddy-bear like Indri and beautifully colourful Diademed Sifaka. In the southern Spiney Forests the terrain is flat and dry and there are some habituated groups of Ring Tailed lemur and Verreaux’s Sifaka.  The latter are sometimes referred to as dancing lemurs for their unusual way of moving across the ground.

Separated from Africa millions of years ago, Madagascar is the Galapagos of the Indian Ocean with its palm-fringed beaches, spiny forests and limestone labyrinths.

The Anjajavy Hotel is a Relais & Chateaux property set on an untouched peninsula in Madagascar's north offering simple yet decidedly luxurious accommodation and access to unbridled nature.

When is the best time to see lemurs?

The best time to see lemurs is from May to October, when the climate in Madagascar is drier & milder.  Lemurs are born around September & October so this is a great time to see babies.  Many species can be seen during the daytime but the smaller species tend to be nocturnal and can be seen on night walks.  Look out for their shiny eyes in your torch light. 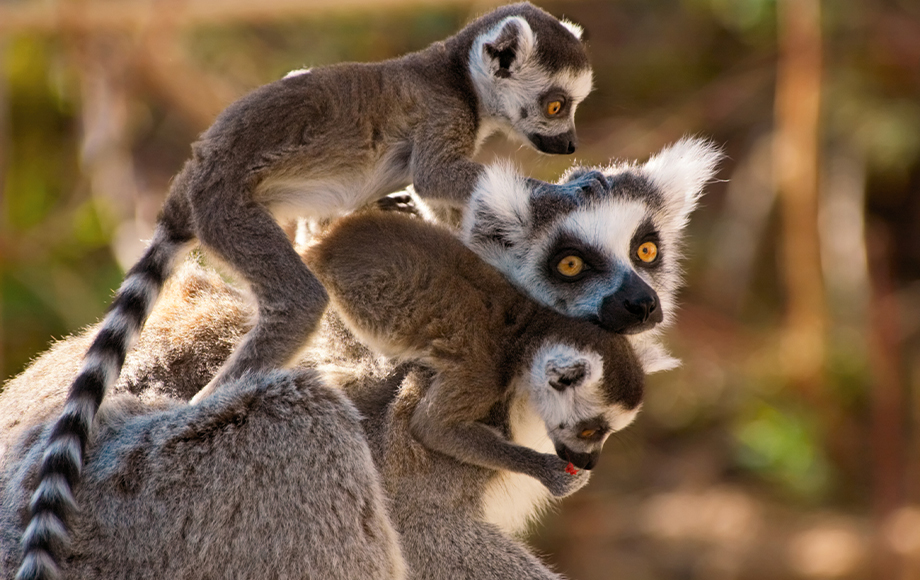 How big are lemurs?

Different lemur species can vary dramatically in size and weight. For example, the mouse lemur is just 30-grams (1.1 oz), whilst the largest lemur species, the indri, can weigh up to 9 kilograms (20 lb).

Loud calls
The eerie territorial call of the Indri Indri (largest of the lemur species) can be heard up to 2 kilometres away.

Dirty fighters
When defending their mating right, male Ring Tailed lemurs engage in ‘stink fights’, during which they smear scent on their tails to waft it at the rival.

Aye! Watch that finger
The Aye-aye is the world’s largest nocturnal primate and has an extra-long finger which is uses to tap on the trees to locate and then dig out insects.