Experience the comforts of luxury hotel barge travel aboard the Magna Carta, travelling slowly along the River Thames and discovering a mixture of old-word charm and historic grandeur – along with the scenic beauty of the English countryside.

This sensational 7-day itinerary journeys slowly down the prettiest sections of the famous River Thames. You will explore magnificent Hampton Court Palace (including Henry VIII’s apartments and the Royal Chapel), visit Dorney Court Manor House and witness the fabulous waterside houses of Bray. There’s no shortage of historic sights on this voyage! To compliment the historical visits, there are several opportunities to cycle or walk along the river and the Thames Towpath. 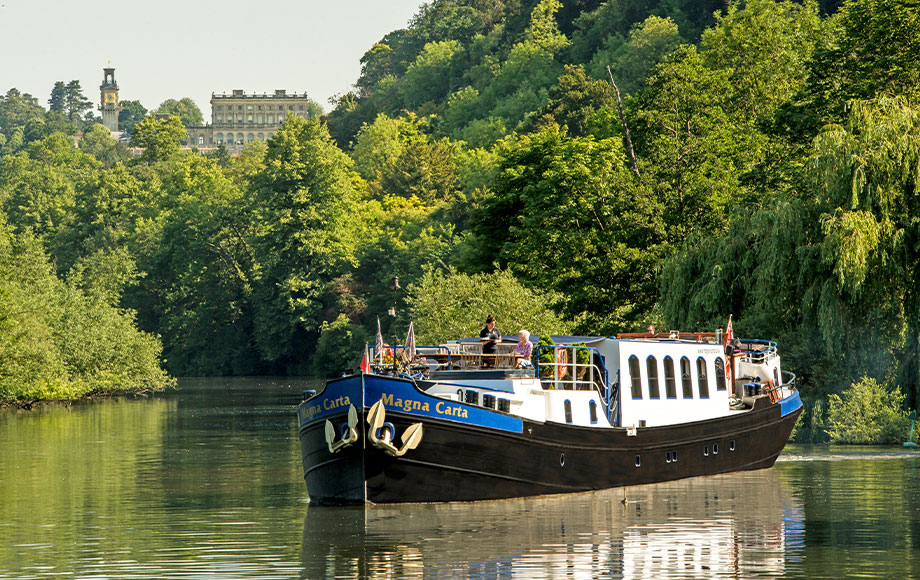 One of the finest vessels that cruises the British Isles, the Magna Carta is an intimate and beautiful barge accommodating just 8 guests. Originally built in the 1930’s, the barge is now a spacious and luxurious “floating country hotel”, that combines both traditional and contemporary features. Fine teak, mahogany and oak woods are used throughout the vessel and are complemented by modern conveniences such as underfloor heating. Communal areas include a large lounge and dining area fitted with comfortable armchairs, whilst there is also an assortment of books available to read. Outside, there is also a sundeck with a small dining area where alfresco meals are enjoyed, as well as a heated spa pool.

The 4 cabins (all named after famous historical figures) are all air-conditioned and feature an ensuite bathroom with walk-in shower. 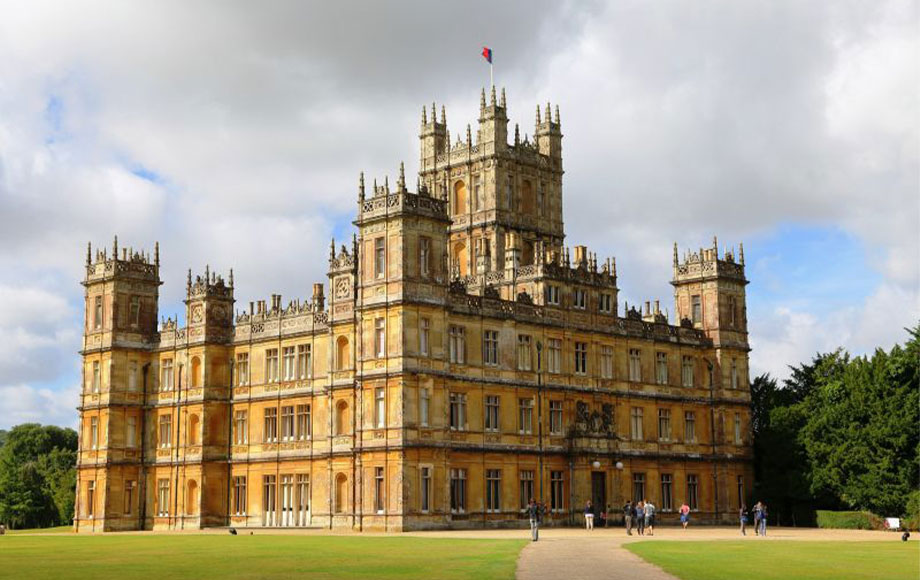 London is one of the most visited cities in the world, making London Heathrow Airport incredibly busy year-round. As a result, all major airlines fly into the airport, including Emirates, British Airways, Cathay Pacific, Singapore Airlines and Qantas. Qantas operate direct flights from Perth to London aboard the 787-9 Dreamliner.

This sensational 7-day itinerary journeys slowly down the River Thames, visiting magnificent Hampton Court Palace (including Henry VIII’s apartments and the Royal Chapel), Windsor Castle and Dorney Court Manor House. To complement the historical visits, there are several opportunities to cycle or walk along the river and the Thames Towpath.

Today you will be met at the Stafford Hotel in central London for afternoon English Cream Tea, before being transferred by private chauffeured minibus to your barge. Enjoy a champagne reception and welcome by the Captain and crew. Dinner on board.

This morning explore magnificent Hampton Court Palace, touring Henry VIII’s apartments and the Royal Chapel. Feel the chill in the haunted gallery and wonder at the superb Tudor kitchens. The gardens are also breathtaking, including The Great Vine (the oldest in the country still producing grapes) and the famous maze. After lunch, cruise through a number of locks including Sunbury and Molesey to your overnight mooring spot at Runnymede. Dinner on board.

After breakfast, you have the option to use the spa facilities of the newly refurbished Runnymede-on-Thames Hotel. Afterward, cruise to Windsor, past the Magna Carta Memorial and Magna Carta Island where, in 1215, King John was forced to meet the powerful barons and seal the historic document.

This afternoon’s excursion is to Windsor Castle. Built by William the Conqueror in 1066 and a royal home for over 900 years, Windsor is the largest inhabited castle in the world. Explore the State Apartments, see Queen Mary’s Dolls House, St George’s Chapel and enjoy the far-reaching views. Dinner on board.

This morning take a short drive to the Tudor manor house of Dorney Court, a very special home that has been owned by the Palmer family for more than 450 years. It has also been used regularly as a film location.

Later, cruise upstream past the fabulous waterside houses of Bray and through the spectacular Cliveden Reach to your exclusive mooring on the Cliveden estate. The estate was once home to the Astor family, and has amazing gardens that were the scene of much political scandal and intrigue. Dinner on board.

Cruise further upstream this morning to visit the Stanley Spencer Gallery in Cookham and take a walk around the village Spencer once described as ‘Heaven on Earth’. Afterward, cruise through Marlow to Hurley.  Enjoy a tour of Peter Freebody’s boatyard nearby and watch in wonder as the traditional craftsmen build and restore classic wooden craft. There is also some time to explore the ancient village, including The Olde Bell (opened in 1135 AD), reputed to be the oldest inn in the country. Return to the barge for dinner on board.

Savour a final morning cruise to Henley-on-Thames through fabulous countryside to your last mooring along the famous Henley Regatta Rowing Course. After an early lunch, drive to Oxford for a fascinating tour of Christ Church, Oxford’s grandest college, founded by Cardinal Wolsey and then again by King Henry VIII. The magnificent surroundings were also where Lewis Carroll wrote Alice in Wonderland. Toast your voyage with a Captain’s Farewell Dinner tonight.

After breakfast, transfer by private chauffeured minibus to central London.

Please note: This is a sample itinerary and is subject to change. On alternate weeks the cruise will be in the reverse direction.

Explore some of the amazing luxury cruises that we can custom design for you. All of our tours are tailor-made to suit your interests, budget and timeframe.

Experience the comforts of luxury hotel barge travel aboard the Magna Carta, travelling slowly along the River Thames

Discover the rich heritage and fabled legends of Scotland as you glide down canals and lochs onboard the intimate 12-passenger Spirit of Scotland barge.

Want to find out more about our tailor made Europe tours?
Get in touch with one of our Destination Specialists.

Sign up to receive updates about exciting journeys, special offers and more.