Lkichami Samburu Warriors (the loved ones)

By African Wildlife Safaris CEO, Steve Cameron. Dec 2017
Having visited Sasaab last year and enjoyed a traditional Samburu ceremonial dance by the Lkichami Samburu warriors (the loved ones), I decided to create a photobook of the dance and then present the book to the Samburu this year when I visited with a group of friends in November.

I was able to present the photo book to Nambik, the young girl on the cover, and although very shy, she and her friends clearly loved it. In addition the warriors who received copies were also delighted to see themselves in print! I also was able to give a copy to Nambik’s mother at their village and she was overawed by it.

This year I was again honored to see all the “morani” (warriors) and the unmarried girls take part in another ceremonial dance on the wide sandbanks of the Uaso Nyiro River. The tall morani, resplendent in elaborate feathered headdresses, beaded arm bands and sheathed knives, stood in one group, ready to start the singing and dancing. The young girls, like brightly coloured birds in beaded necklaces and brilliant skirts clustered together nearby.

The lead warriors began their rhythmic singing, telling of battles long past, triumphant cattle raids and beautiful maidens loved. The dancers came forward one by one to show off their strength, jumping straight upwards as high as they could, each trying to outdo the one before. Then the girls joined in and a conga line of dancers snaked their way along the sand, thrusting their necks forward with each jump as graceful as giraffes. We ‘’muzungus’’ subsequently joined in the fun, trying to keep up and probably looking hopelessly ungainly in the process.

As the sun set over the hills and the riverbank darkened, the dancing continued whilst a goat was ritually sacrificed (out of sight of the girls) for the feast that was to take place later back in the village.

Somehow I get the feeling there is pressure for a second book! 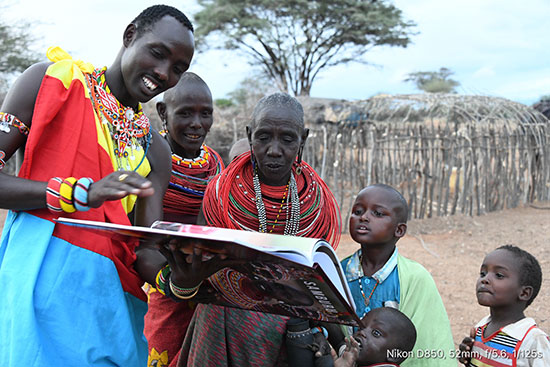 Copies of the photobook Samburu by Steve Cameron are available for purchase. Please complete the online form and we will forward an invoice for payment. The cost of the book is AUD $100 incl GST for delivery within Australia. Prices for overseas delivery (from $122 AUD) are available on request.

100% of Proceeds from sales, will be donated back to the West Gate Conservancy where the Samburu live. West Gate is part of the Northern Rangelands Trust. Further details can be found at – https://www.nrt-kenya.org/

Books take between 7 and 10 working days to deliver.

Please fill out the following form to order your copy or copies of the book. NO payment is required at this stage, and you will be invoiced once we receive your order. You can pay this invoice via EFT or credit card. Details will be provided on the invoice.