Skip to content
Previous Next
Mombo – Okavango’s Place of Plenty

Extract taken from Chpt 5 – A Time for Tales

What is the attraction of Mombo? Why does it evoke such passion and commitment in those who have lived, worked or even visited it? Why do so many guests return to Mombo time and again? Why do so many guides see it as the high point of their safaris? Why do people continue to enthuse about it years later? Here is Annie’s story and experience that has contributed to the Mombo legend. 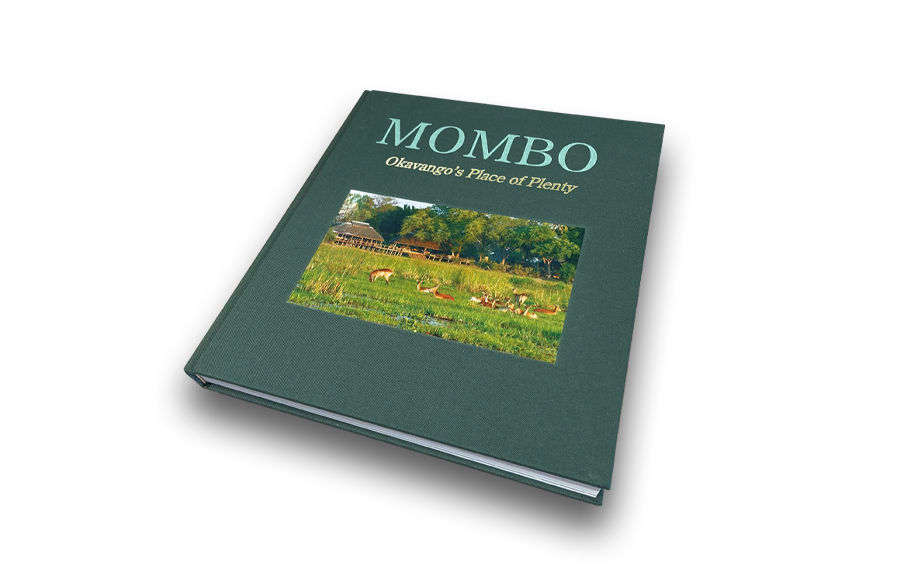 All in a Day’s Work – by Annie Zambelli

‘Nostalgia? You bet. The time I spent at Mombo was undoubtedly one of the most special and rewarding experiences of my life. It was a privilege to live and work in a true wilderness and, having already visited many wildlife areas at that time as a specialist travel consultant, Mombo stood out as one of the best, and to this day is firmly etched in my mind. It was always destined to get better and better.’ 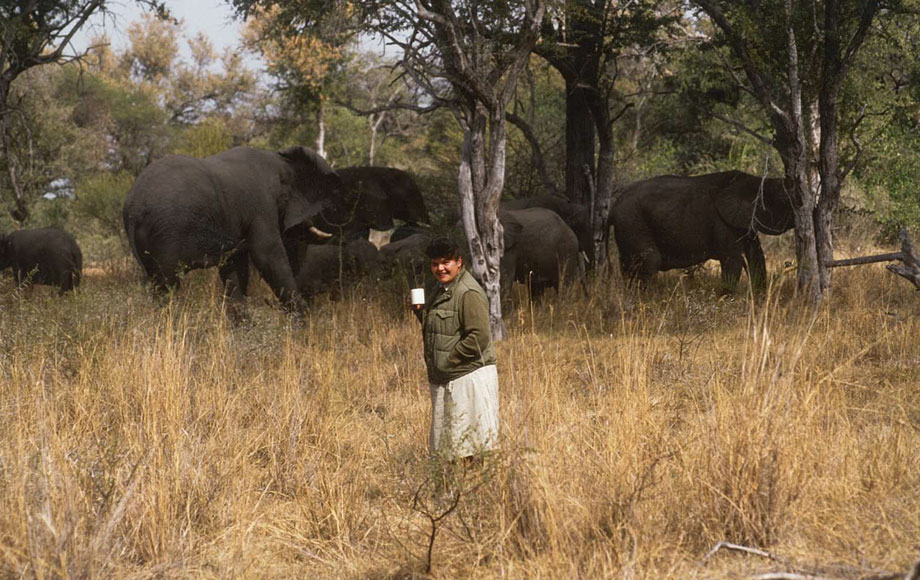 Annie at the original Mombo Camp

Annie arrived in Botswana in June 1991 to work with Wilderness Safaris for three months. Chris Kruger immediately sent her to Mombo Trails where she spent six weeks, hosting guests and getting to know the ropes. She was so passionate about her life in the Delta that she returned to Botswana in February 1992 and worked as relief manager in Wilderness Safaris’ lodges for almost two years. During this time she came to regard her tent at Mombo as her home. 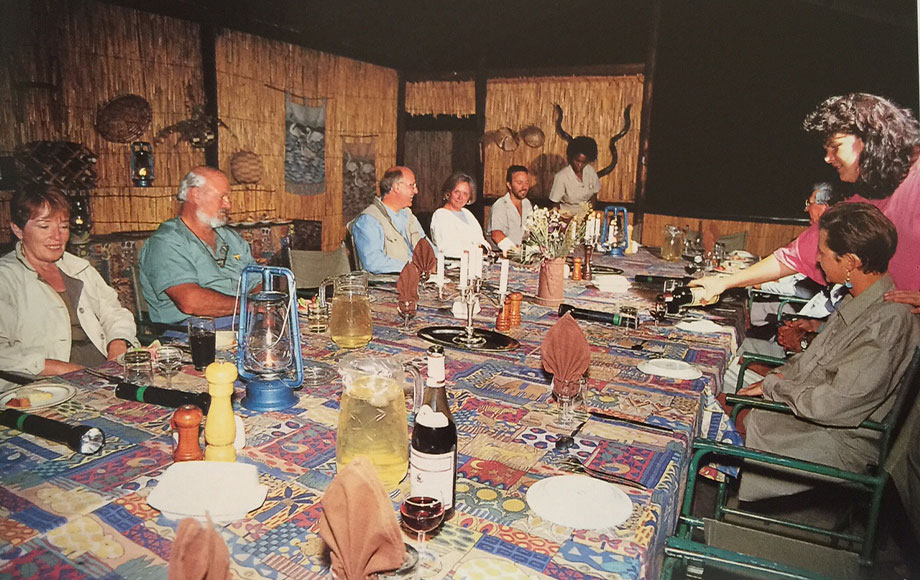 Annie was at Mombo with Dave and Helene Hamman when the wild dogs were at their peak and the Mombo Boys were the dominant lion coalition. Encounters with the ‘Boys’ and the dog pack have left her with some of her most vivid memories of her time at Mombo.

Annie recalls that the guests had just left for the morning game drive and she had settled down in the office to complete the morning’s paper work and make the first radio call. The sound of the water pump echoed through the camp as she sat and wrote out the day’s menus for the chef. Suddenly she heard loud shouting coming from the kitchen and then from the front of the camp: ‘I jumped up and ran outside the office to see what was happening. Dave Hamman, who was down by the water pump shouted: “Dogs – quick, my camera.” Suddenly I heard thundering feet from behind me. As I spun around, a young kudu came bounding out of the office with a wild dog hot on its heels! They disappeared behind the tents and I was left standing speechless.

We were in the middle of a hunt! I could feel my heart racing and stood like a statue, waiting for Dave to give me directions. He could get his own camera, I thought, as I wasn’t going back into the office! It wasn’t long before there were dogs everywhere. By the time we climbed on board a vehicle to follow the action, part of the pack had killed an impala outside the bar! When it was all over, they settled down in the shade to rest. The pack stayed with us for most of the morning, to the delight of our guests when they returned from their morning drive.’ 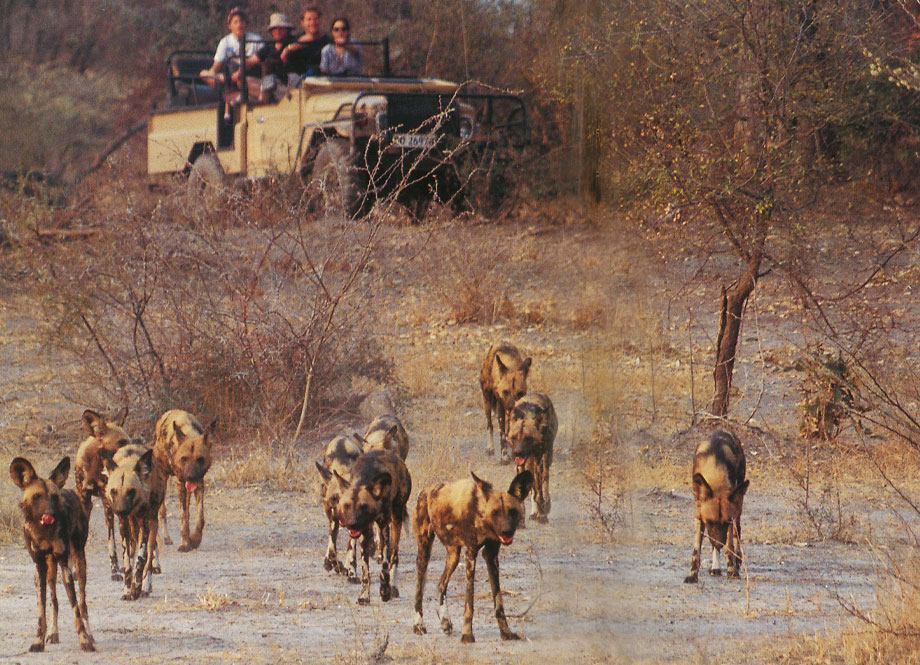 Another encounter with the Mombo pack may have been less dramatic, but provided an undercurrent of excitement one night at dinner on the floodplain in front of Old Mombo Camp. Evening was approaching fast and the staff were preparing the camp for the night. ‘Paraffin lanterns lining the pathways and hanging from the lower boughs of tall trees would soon transform our bush haven into a flickering fairyland. We had set up the dining table in the open area overlooking the wonderful floodplain in front of the camp.

As I hurried from my tent to help with the last-minute preparations, I noticed a number of objects from the dining-room strewn along the path. Puzzled, I continued on to the bar only to find the entire staff huddled in one corner. In a chorus of faint voices they nervously told me that we had visitors – the wild dogs had come into camp.’ The staff had literally dropped what they were doing and ran to the safety of the bar, from where they watched the dogs as they explored the camp. Annie looked out, but could see nothing until she caught sight of a pair of big round ears hidden in the wispy grass near the dining table. They were all jolted back to reality by the sound of the vehicles returning from the game drive and the guests trooped into the bar eager to recount their afternoon sightings.

‘They were so excited about their own wild dog experiences that it didn’t seem the time to tell them of our own wild dog encounter!’ The guests had followed the dogs hunting and even witnessed a kill. They recalled that all too soon it was over and the dogs had disappeared. Or had they? Later, as dinner was announced, someone thought they saw something move near the dining table, but it was dark and no one else could see it. ‘Whatever it was, it’s gone’, said one of the guides. But the staff knew differently. As they served dinner they kept glancing nervously into the darkness. They knew that the visitors were actually still in camp and resting close by! 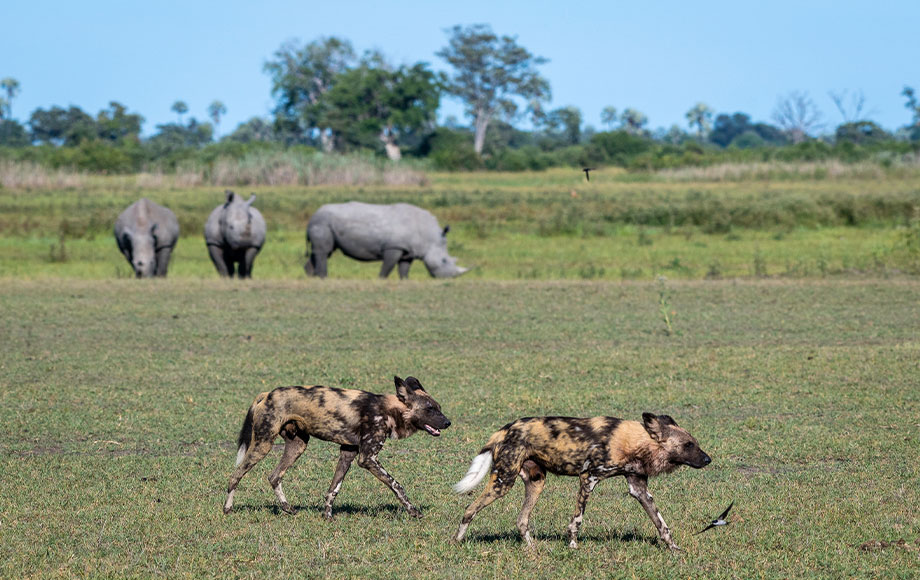 The three Mombo Boys regularly visited Old Mombo Camp. Their favourite resting place was in front of Tent No.8, which overlooked the floodplain. ‘Occasionally guests didn’t arrive for a game drive and when we went to look for them we invariably discovered their game-viewing had already begun! They would be found peering out of the gauze of their tent at a lion or two resting metres away.’ The Boys also regularly added excitement to dinners at Mombo. Annie recalls that the dinner table was always buzzing, with guests talking over each other in their excitement at recounting their wildlife sightings. The flow of conversation was invariably brought to an abrupt halt by the haunting call of the Mombo Boys. By the time dinner was finished and the guests had moved to the fire, their calls would turn into ‘bellows’ as they moved closer. Annie recalls standing beside the fire one evening as ‘The Boys’ walked within metres of them, in single file, calling as they went: ‘This is something that I will never forget – what a presence, their beautifully groomed manes looked like they’d just emerged from a hairdressing salon. As I looked across at the guest standing next to me, I couldn’t help but notice his spectacles had fogged up! Needless to say, the guests stayed by the fire until the last embers were no longer glowing.’ 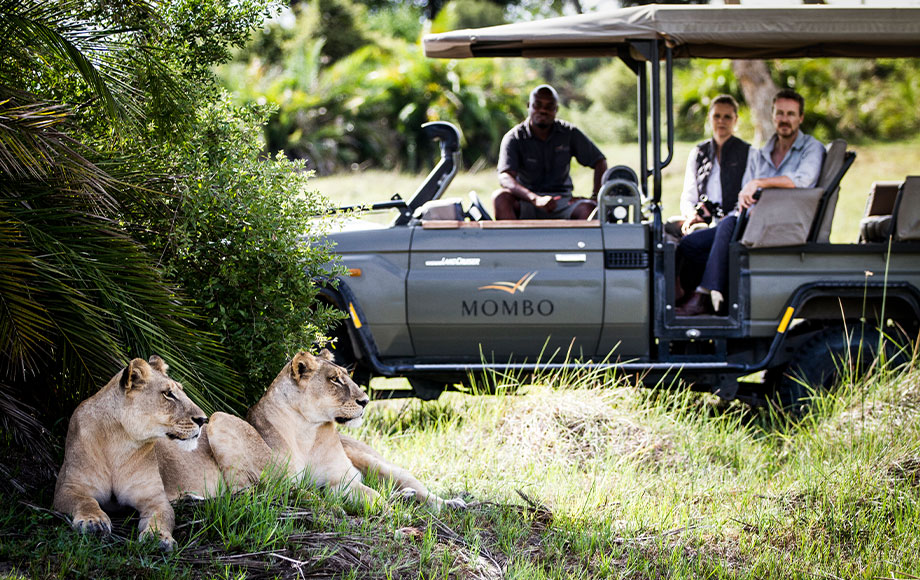 Lion encounter during a game drive

Annie Zambelli lives in Melbourne, Australia where she is the general manager of a travel agency specialising in African safaris. She describes herself as ‘passionate about Africa’ and her work in the travel industry has enable her to return to the continent countless times in the past 18 years.’ 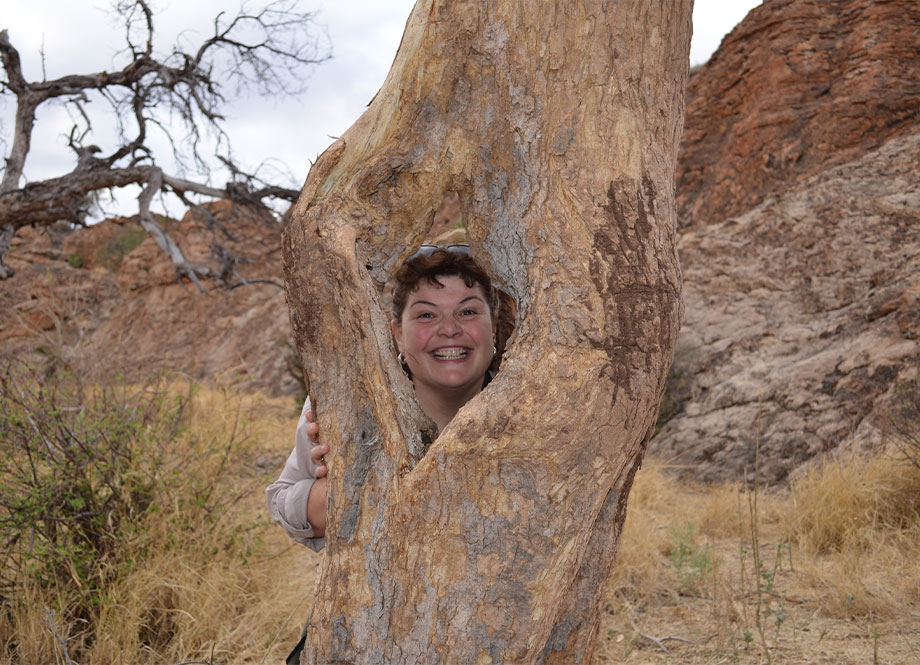 Where is Mombo Camp now?

Since its humble beginnings in 1983, Mombo has evolved to become one of Africa’s most exclusive and sought-after safari experiences. In 1983 the Mombo concession – located in the Moremi Game Reserve in the north-eastern corner of Chief’s Island – was a prime hunting concession. When two young guides, Colin Bell and Chris McIntyre, won the bid for the site, it was slowly converted from a hunting camp into a world-leading conservation-focused safari camp.

The lodge is a far cry from when it began; as a small camp with canvas tents, trundle beds and a small partially-covered central dining area. It has since moved location to overlook a beautiful floodplain, gone through multiple rebuilds (most recently in 2018), countless refurbishments and is now one of the leading eco-lodges in the world having continually won a multitude of highly-regarded awards. 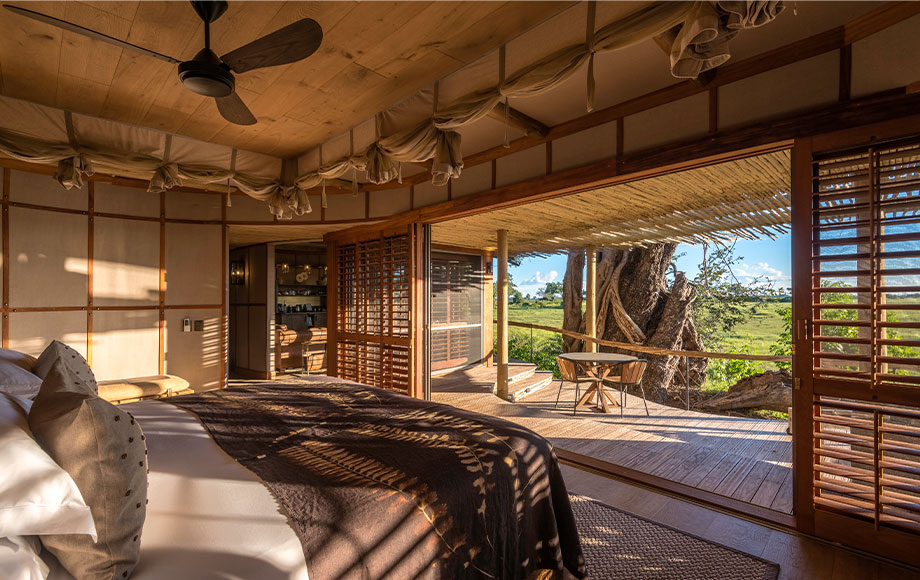 What hasn’t changed about Mombo over the last 37 years is its incredible wildlife, outstanding guides, dedicated and friendly staff and exemplary level of service that all contribute to make it Botswana’s – and one of Africa’s – very best safari experiences. 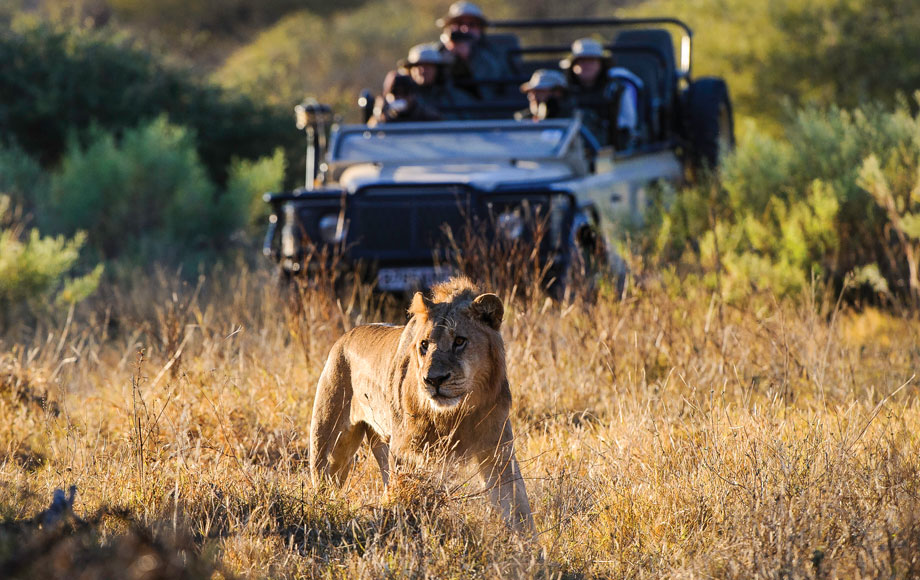 If you would like to visit this
extraordinary camp, talk to Annie